The resurrected Christ when He visited the Nephites in the Book of Mormon taught: “he that hath the spirit of contention is not of me, but is of the devil, who is the father of contention, and he stirreth up the hearts of men to contend with anger, one with another.”

Satan, or the devil, thrives on contention, conflict, and division. He seeks to gain power over Heavenly Father’s children through conflict. Satan creates ideologies that stoke envy, resentment, and hatred to create strife which then leads to tyranny. Throughout the history of the world, Satan has used a variety of ideologies to accomplish this. Examples of these include racism, antisemitism, Nazism, fascism, communism, and socialism. Each of these ideologies sows hatred of “the other,” teaches actions of “the other” is what has caused their suffering and thus society owes them recompense for those injustices. Because “the other” is responsible for all their suffering they stir up “righteous” anger and justify the use of violence or government mandates to destroy the agency and property of others.

Critical theory is Satan’s most recent and most academic version of this.  Critical theory was developed by a group of academics known as the Frankfurt School following World War II. These academics included individuals such as Herbert Marcuse, Theodor Adorno, Max Horkheimer, Jurgen Habermas, and later Michel Foucault. These men had been academics in Europe prior to World War II and had philosophically been Marxists and socialists. With the rise of Nazism, many of these individuals fled to the United States and began teaching here. Upon their arrival, they were disgusted by the prosperity, happiness, and movement between the classes in the United States. They despised freedom and free enterprise’s ability to lift people out of poverty and achieve happiness without a worker’s revolution and the destruction of freedom and private property.

Seeing an effective free-market society blew a hole in their Marxist ideology, sending them back to the drawing board to redefine critical aspects of Marxism. Rather than Marxism being simply a class conflict – the rich vs. the poor; the capitalist vs. the worker – they redefined the conflict as a conflict between the oppressor and the oppressed. Anyone could be an oppressor and anyone could be oppressed. Society is a Hobbesian battleground of groups struggling for power so they can oppress their oppressors. These groups use force to right the wrongs of the injustices they feel, or have been told, they have suffered, and establish a socially just society. This is sometimes called Cultural Marxism, but it is officially known as Critical Theory.

This new Marxism spawned numerous academic studies such as gender studies, queer studies, and race studies; individuals began to redefine all relationships in terms of race, gender, and sexual orientation. Each “minority group” began accusing society of historical and contemporaneous wrongs that were oppressing them. These groups lobby for government force to destroy the system that enables their oppression: limited government and free markets. Because they are victims, they believe or were convinced the “right thing to do” is to use force, government or other, to deprive liberty and seize property of other more “privileged” citizens.

We see this ideology driving much of modern politics today with different identity groups claiming the status of oppressed and attacking their “oppressors.” They desire to use the government to destroy freedom and redistribute wealth under a Marxist socialist system. Be not deceived: this ideology and the tactics thereof are found and utilized by every political faction in the United States and worldwide.

The Book of Mormon Refutes

Gratefully, the Lord has prepared us to confront this evil ideology through the Book of Mormon, by showing how it can be used to manipulate and create conflict and ultimately destroy freedom.

In the Book of Mormon, critical theory is used by the Gadianton robbers to manipulate individuals to join their ranks and to justify their murders, robbery, and attacks on the rights of the Nephite and Lamanite peoples.  This is best illustrated by Giddianhi’s letter to the chief judge Lachoneus. He begins by flattering Lachoneus for his and the Nephites’ bravery in defending what they “suppose to be [their] right and liberty” and that they stood “well, as if [they] were supported by the hand of a god, in the defense of [their] liberty, and [their] property, and [their] country.” It is interesting to note the narcissism and contempt the robbers have for principles of liberty, property, and God. This contempt for true principles colors everything the robbers do.

Giddianhi praises his own men and gives insight into what is motivating them and what their demands are: “And I, knowing of their unconquerable spirit, having proved them in the field of battle, and knowing of their everlasting hatred towards you because of the many wrongs which ye have done unto them, therefore if they should come down against you they would visit you with utter destruction.

“Therefore I write unto you, desiring that ye would yield up unto this my people, your cities, your lands, and your possessions, rather than that they should visit you with the sword and that destruction should come upon you.

“Or in other words, yield yourselves up unto us, and unite with us and become acquainted with our secret works, and become our brethren that ye may be like unto us—not our slaves, but our brethren and partners of all our substance.

“And I write this epistle unto you, Lachoneus, and I hope that ye will deliver up your lands and your possessions, without the shedding of blood, that this my people may recover their rights and government, who have dissented away from you because of your wickedness in retaining from them their rights of government, and except ye do this, I will avenge their wrongs. I am Giddianhi.” (3 Nephi 3:4,6-7, 10, emphasis added)

Here we see the motivation of these murderous robbers was that the Nephites, or the Nephite society, government, and religion, had wronged them in many ways – an accusation of historical and contemporary injustice and oppression – and that these acts of injustice justified the Gadiantons seizing the property and liberty of the Nephites and redistributing it that they might be “partners in all [their] substance.”

According to Giddianhi, the Nephites were the oppressors and the Gaddiantons had been the oppressed – and that justified their taking the powers to the government to “avenge their wrongs” through the destruction of agency and private property.

We see in an earlier chapter this began with Zoramites manipulating young Lamanites into joining this secret combination by telling them they were victims of Nephite oppression and injustice, which justified violence to achieve “justice” against the oppressor. The concept of oppressor vs. the oppressed can and is used by evil to manipulate others into destroying free government and the agency of others. This should sound familiar.

This episode from Nephite history serves as a warning to us in the latter-days. We are being warned of the destructive potential of critical theory and how evil can manipulate people into believing they are oppressed and society owes them reparations. This leads to violence, tyranny, and the destruction of freedom in the name of justice for the wronged. We must remember that Mormon saw our day and included this epistle and from the Gaddianton Robbers so we can use it to identify evil in our day. The better we understand these ideas, the better equipped we will be to combat it. We as Latter-day Freemen must reject Critical Theory and its destructive ideas, we must teach our friends and families of its evil origin and goals, and prepare ourselves to stand against it or we will continue to see greater strife and loss of our freedoms to a Satanic tool of deception and conflict. 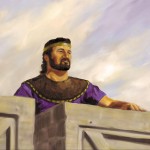