If you do an image search for optical illusion paintings, you’re likely to run into the work of Octavio Ocampo. This one is called “General’s Family”: 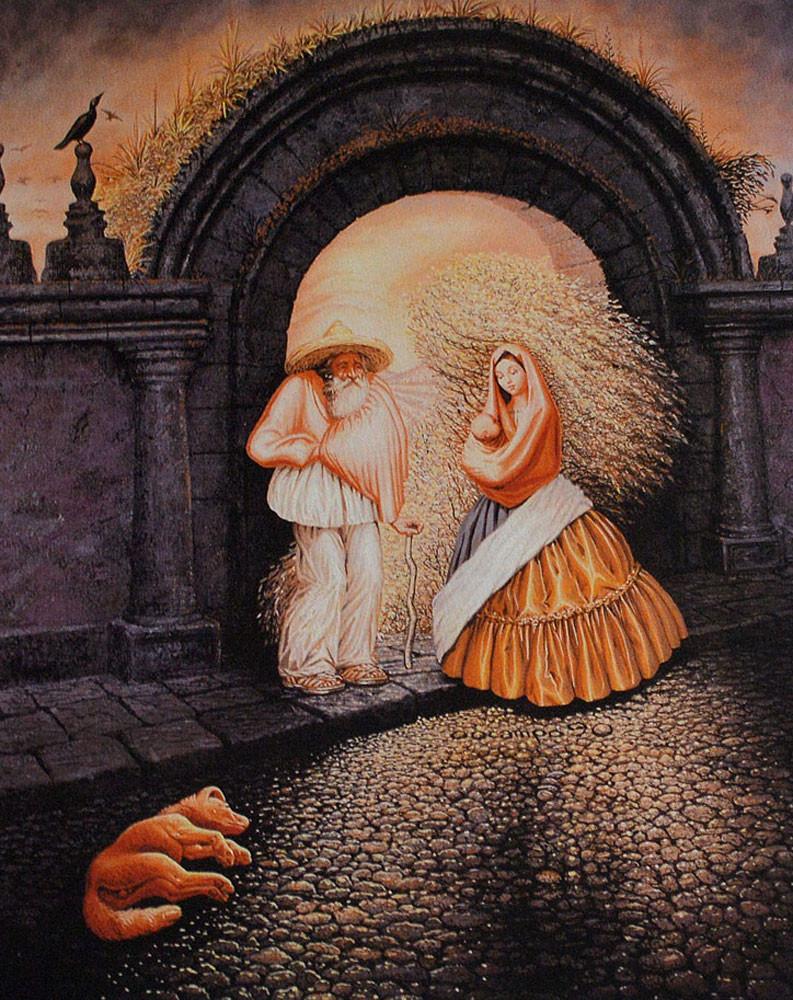 The immediate impression this painting gives is that of a distinguished old man — but a closer look reveals more than what was initially evident.

I had a similar experience while reading Acts 6-9 for this week’s “Come Follow Me” lesson. The title of the lesson is a direct quote from the person whose story (deservedly) takes center stage in this reading, one Saul of Tarsus. But a closer look shows us that, though the words were his alone, the sentiment expressed therein was a common theme throughout this particular block of scripture — and as a result of several people actively seeking to do the will of the Lord, we have not one, but three unlikely converts. Let’s have a look.

Simon was a man who lived in the city of Samaria; we don’t know loads about him, but Acts 8:9 describes him as a man who “used sorcery, and bewitched the people of Samaria, giving out that himself was some great one.” What precisely is meant by sorcery is rather vague, but what is quite clear is that he was held in great esteem by his neighbors, who said of him, “This man is the great power of God.” (Acts 8:10)

Philip was one of the seven who were called to assist the apostles in running the church. (Acts 6:3-5) When the Lord asked him to go and teach the people of Samaria, he went — of itself, no small thing, given that there was no love lost between the Jews and the Samaritans. But Philip, perhaps having learned well the lesson of Jonah, went without complaint and taught the people; Acts 8:12 reports his mission was quite successful.

Simon could have easily seen Philip’s success as a threat to his own prestige — indeed, we’ve already seen what happened when good men rocked the ecclesiastical boat in Jerusalem, resulting thus far in two executions (Jesus Himself, and then Stephen) and two imprisonments (Peter and John). One could be forgiven, then, for assuming Simon the Sorcerer was likely to throw a fit at this turn of events. But he didn’t — he not only accepted Philip’s teachings and was baptized, he then “continued with Philip,” wondering at the miracles and signs that followed him. (Acts 8:13)

Simon is perhaps best known for his subsequent interaction with Peter and John, when he offered to buy the priesthood from them. But I would hope that we can remember just as well, if not better, his response to Peter’s stern and thorough rebuke: “Pray ye to the Lord for me, that none of these things which he have spoken come upon me.” (Acts 8:24) How often do we receive chastening with belligerence and excuses? I know I have. But here we have Simon, the unlikely convert, responding in humility and submitting himself to authority in such a way that echoes the sentiment of the father in Mark 9: “Help Thou mine unbelief.”

May we all learn from his example.

After his success in Samaria, the Lord called Philip to a desert place south of Jerusalem. Upon his arrival, he found a chariot belonging to “a man of Ethiopia, an eunuch of great authority under Candace queen of the Ethiopians, who had the charge of all her treasure.” (Acts 8:27) In other words, this is a man of great wealth, power, and authority — the sort of man one might be hesitant to approach, and the sort of man one could easily convince oneself is unlikely to accept the gospel anyway, so why even embarrass yourself by trying? But when the Spirit tells Philip, “Go near, and join thyself to this chariot,” he not only immediately complies, he runs to catch up. (Acts 8:29-30)

Philip finds the eunuch reading the prophecies of Isaiah, and asks him if he’s understood what he’s reading. The eunuch replies, “How can I, except some man should guide me?” (Don’t feel bad, good sir eunuch; we all know exactly how you feel.) Philip, having done his own homework on the matter, is able to explain and expound the scriptures unto the eunuch, preaching to him of Christ having fulfilled that very prophecy. After hearing and receiving this teaching, in an endearing show of frankness and practicality, the eunuch then asks to be baptized in the next body of water that they pass on their way. (Acts 8:30-36)

It would be easy, in our own gospel teaching, to bypass someone like this eunuch. Not only would his own power and authority made him seem intimidating, but the adversary might also whisper, “He has no wife, no children; he’s only one man. Not worth bothering with.” We don’t know how many, if any, other people were converted because this eunuch received the gospel, and frankly, it does not matter. Christ himself taught of the good shepherd leaving the ninety and nine to seek out the one, and the fact that this man “went on his way rejoicing” (Acts 8:39) is itself reason enough to justify Philip having made such a significant detour. (See D&C 18:15)

Much has been said and written of the conversion of Saul of Tarsus on the road to Damascus, and much of it by people far more learned than I am. We won’t rehash everything, but there are a few things I’d like to highlight here.

First, the title of this post, which is also the title of this lesson, is a direct quote from Saul’s own mouth. (Granted, when he said it, it wasn’t in English, but still.) Those are the words he uttered when he found himself confronted with the resurrected Jesus on the road to Damascus. Some might marvel at what seems like a such quick about-face on Saul’s part, but it seems perfectly clear to me that, in a sense, this wasn’t an about-face at all. Saul’s zeal in persecuting the Christians came not from a desire to fight against God, but from a desire to do His will; he was simply missing a few key pieces of the puzzle. The Lord saw this in his heart (see 1 Samuel 16:7), and provided him with a personalized experience that would not only provide him those missing pieces, but would do so in such an unmistakable way as to thenceforth direct Saul’s considerable zeal for good.

Echoing Saul’s quoted sentiment thereafter was the disciple Ananias, who was charged with finding Saul in the city of Damascus and giving him a blessing. He was, as the lesson manual says, “understandably hesitant,” but once he confirmed with the Lord that that was indeed what he had been called to do, he “went his way” (Acts 9:17) and did just that. Conventional wisdom would have insisted that he keep his distance from such a man as Saul of Tarsus, but Ananias acted in a manner that echoes the sentiments of a prophet whose ministry was centuries before and half a world away: “[N]evertheless, I know in whom I have trusted.” (2 Nephi 4:19) Ananias’s own trust in the Lord enabled one of the greatest missionaries who ever lived to begin on his way.

Elder Jeffrey R. Holland, in an address to religious educators at a symposium on the New Testament at BYU in August 2000, said this:

President Boyd K. Packer, himself a master teacher and long-time administrator in the Church Educational System, has a question he often asks when we have made a presentation or given some sort of exhortation to one another in the Twelve. He looks up as if to say, “Are you through?” And then says to the speaker (and, by implication, to the rest of the group), “Therefore, what?” “Therefore, what?” I think that is what the Savior answered day in and day out as an inseparable element of His teaching and preaching. I’ve tried to suggest that. These sermons and exhortations were to no avail if the actual lives of His disciples did not change.

“Therefore, what?” indeed. What is it we’re to learn from these stories? There are many things to learn here, to be sure, but the one that jumps out at me is the importance of living worthily to qualify for the companionship of the Holy Ghost. “What wilt thou have me to do?” is a wonderful question to ask, but it’s really only useful if there follows an answer, and such answers are hard to come by if we have hardened our hearts against them.

And so, in answer to Pres. Packer’s piercing question, I will quote President Henry B. Eyring’s October 2010 Priesthood Session address, “Serve With the Spirit:”

And so my message for us tonight is this: let us do whatever is required to qualify for the Holy Ghost as our companion, and then let us go forward fearlessly so that we will be given the powers to do whatever the Lord calls us to do. That growth in power to serve may come slowly, it may come in small steps that are difficult for you to see, but it will come.

For it is in so doing that we will not only bring joy and blessings into our own lives, but also into the lives of others, some of whom we would not, for one reason or another, have otherwise noticed or considered.

Angela Nelson is a wife and stay-at-home mother of three boys. She has no credentials to speak of. One of her most unique features is the dent in her nose from the time she face-planted into the corner of a coffee table as a toddler; despite repeated efforts, her husband remains unable to pop said dent out.